Issam Khalidi
The false lines which separated Arab countries after the Sykes Picot Agreement in 1916 could not separate the ties of brotherhood and friendship between Arab people. Examining the roots of athletic relations between Palestine and Jordan, one will find a numerous matches that took place in Palestine and Transjordan before 1948. It is worth noting the continuous cooperation between the British teams in Palestine and their counterparts in Transjordan.
Under the title “Nadi al-Ittihad al-Riyadi” [The Club of the Sports Federation] in November 1931, Filastin (established in 1911) published the following letter from Transjordan:

Our desire to support the sports idea encouraged us to form a club that could include all the youth who are concerned about the progress of sports in our country. We called this club (Jordan Sports Club). And with the kindness of his Majesty the Prince and the vim of the members, this club made good progress by competing with the best teams in neighboring countries. Lately, we found that for the progress of sports we needed to merge all the clubs in this country into one club and to name it Nadi al-Ittihad al-Riyadi. However, this good idea which was welcomed by all football players in the two clubs (intended to be unified – al-Urdon and Talal), has not been accepted by people who were working for their own benefits; who used the club for weaving conspiracies that harmed sports. Therefore, we decided to distant ourselves from these people and join Nadi Talal forming one club we called it Nadi al-Ittihad al-Riyadi.
Amman, November, 1931. [1]

Invited by Amman’s Selected Team, in November 1934, al-Nadi al-Arabi in Jerusalem made a visit to Amman and matched with the former. The match was under his Majesty Prince Abdullah who could not attend because of the illness. However, his son Talal did attend. It was also attended by government employees and British army officers. The Arab Sports Club won the match five to one. Al-Difa’ newspaper (established in 1934) was informed that among the Jordanian team were four British soldiers.[2]

In January 1943, al-Difa’ published news that Transjordan’s football team visited Gaza and played with Gaza Sports Club. The match ended with the win of the Jordanian team 2:1.
A new stage of cooperation started after the re-establishment of Palestine Sports Federation (PSF) in 1944.  One of the main tasks in front of PSF was to sustain the relations with the Arab Federations in the neighboring Arab countries.  In April 1945, the Orthodox Club in Jerusalem visited Jordan and matched with Fiasal Club there. The Orthodox Club won 2:1.[3] In October al-Ahli Sports Club in Amman matched with the Orthodox Club in Jerusalem at the YMCA play field. [4]

In November 1945, al- Difa’ published the following news:
On Sunday in the afternoon  the Arab Sports Club matched with Nadi al-Ahli in Amman. The match started at 3 pm. It was attended by prominent figures and three thousand fans. In the first fifteen minutes of the first half al-Ahli was in full control of the match. However, al-Arabi re-organized its offensive tactics. It was able to control the course of the game until the end of the first half which ended without goales. The match ended with the win of al-Arabi one to nothing. The Arab Army played its music during the game. Later, al-Arabi team was welcomed in Raghadan Palace in Amman by his Majesty Prince Abdullah. [5]

In September 1946, the editor of the sports column in Filastin wrote:

We described our recent trip to Jordan, and we explained what we saw. However, we did not mention what we felt after finishing this trip and what some colleagues whispered in our ears. Therefore, we decided to dedicate this article for this purpose. What did we see and hear in Amman? We found here that there are proficient football teams that bodes tangible progress. We found extreme hospitality and strong bodies. We found tangible cooperation between clubs whatever the differences in ethnicities are. No difference between Circussians, Syrians, Armenians or Jordanians. They whispered in our ears that they need the encouragement and the sympathy of the government so they can make steps forward. We found in the country’s press a small part for sports and listed news. It did not allocate articles for sports though sports occupy most of the prominent titles in the newspapers. And we wish the Kingdom in its new era all the best and progress. We hope that all its dreams will be realized soon, so we will see progress in sports which could lead Jordan to compete with Arab countries and rise up the new generation. [8]

In January 1947, Difa’ published a letter sent by Sam’an Qandah in Amman, correcting what had been published previously (in al-Difa’) that al-Ahli Club in Amman brought an elite of its best players from Transjordan to match with the Islamic Sports Club in Jaffa, confirming that the championship in Jordan was won by al-Urdon and al-Faisali Clubs; that al-Ahli brought with it its right wing to Jaffa from Jordan Club. Therefore, in this match al-Ahli Club did not represent the two clubs (al-Urdon and al- Faisali).[9]
Soon after, under the title (Where is the Association?), Filastin published the following news:

“We received the latest issue of al-Jazeera newspaper that is issued in Transjordan. It includes this article published by al-Jazeera: Where is our association regarding the match between al-Ahli in Amman and the Islamic Sports Club in Jaffa on February 1st 1947 ? Where it is regarding this sad result? Al-Ahli wanted to match the Islamic [Sports Club]  face to face alone.  After the withdrawal of some of its players it could not face the champion of Palestine – the Islamic Club of Jaffa. Wasn’t it good for al-Ahli to take what it lacked of players from other clubs? Wasn’t the duty of the association to organize this game?"

In March 1947, Filastin received a letter from the secretary of PSF that  stated that “one of Amman’s clubs is willing to visit Egypt to match with some teams there. It is known that this club is negotiating with some Palestinian players who are members of clubs that joined the PSF to travel and participate with it in these matches. Therefore, PSF draws the attention of all clubs and players that its statutes prohibit this kind of behavior. It [PSF] considers that any player takes part in these matches is a violator of this law.” [10] 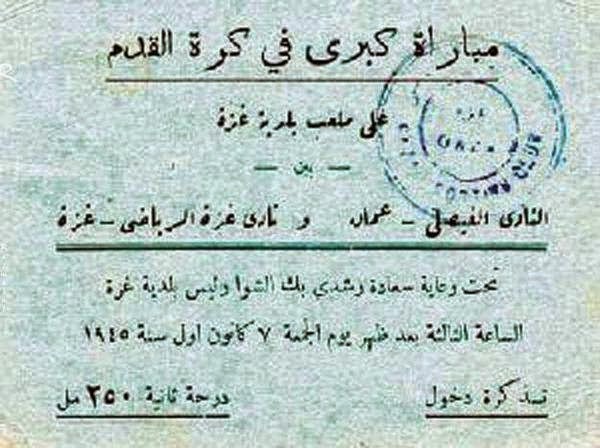 An entry ticket to a game between Faisali Club in Amman and Gaza Sports Club dated December 7th 1945, at Gaza Municipality field.

Established in November 2009, this blog aims to introduce readers to the developments of sports in Palestine. HPS is concerned about highlighting and documenting Palestinian sports since the first decade of the 20th century to the present date, which will require contributions from all researchers and historians.
For information, please contact;
Issam Khalidi
iskhalidi55@hotmail.com
Issam Khalidi, an independent scholar, lives in Monterey CA, US. Born in Jerusalem, Palestine. Received his PhD in 1987 from the Institute of Physical Culture, Moscow, Russia.

Sports and the Palestinian BDS Struggle